I didn't have a lot of time for minis this week but I do have a few things to show you.  First, I mentioned in my last post that I had made a few whistles for my SIL, Jean,  who was knitting a life guard teddy bear for a client but I didn't get a picture of the finished whistles before I mailed them out. Well, Jean sent me a picture once the whistles arrived.  She has made many of these 18" bears in a variety of occupations or other special circumstances like graduates, etc.  Here is her life guard with one of the little whistles. 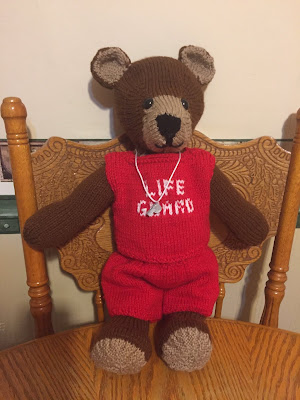 I also have some good news on the shepherd's hut front - the little lamb now has little eyes and a nose and...da ta da!!....his mommy showed up! 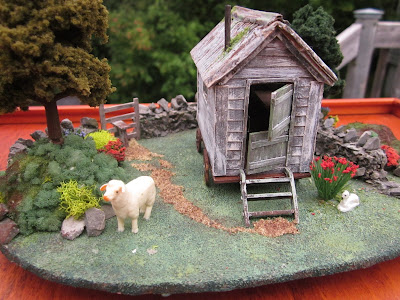 Michaels had a sale of sports memorabilia display cases so I bought one for a football and placed the shepherd's hut project in it.  That should keep the dust off and it has a mirror for the back wall so you can see both front and back clearly.

Moving on, Marijke and I had  mini day through skype today.  Louise was not able to join us.  I decided to tackle those two exterior lights I had told Louise I would make for her Art Deco art gallery she is making. I mentioned what I needed to Liz at Grandpas Dollhouse and she was able to come up with a couple of suitable globes.  I also purchased some jewellery findings I thought would work.  I had a couple of brackets in my "stash".  Here are the pieces I started with, along with the inspiration picture of the lights she fell in love with.  Unfortunately, with taxes they would have cost over $300 for a pair, hence the decision to try to make a version of them for much, much less!  We didn't need them to be exact - just needed them to capture that "art deco" vibe. 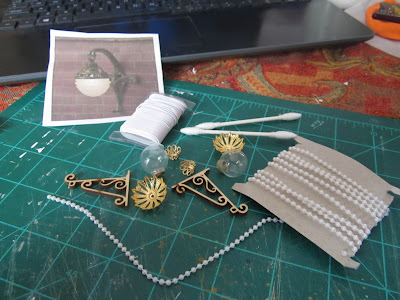 First, I poured some watered-down paint into the little globes and swished it around to coat the inside for an opaque finish.  I set these upside down on some paper towel to allow the extra to drain out while I painted the brackets and the jewellery findings black.  When they were dry I painted them with a clear sealer then when dry again, glued the smaller jewellery findings to the top of the larger ones.  I then cut short lengths of the pearl beading and glued them around the globes to provide interest and to fill in the space between the jewellery findings and the globes. I painted the beads with the same colour I had used to coat the inside of the globes.  Once dry, I also used the sealer on the beads which had the added advantage of filling in the little spaces between the beads.  Perfect! 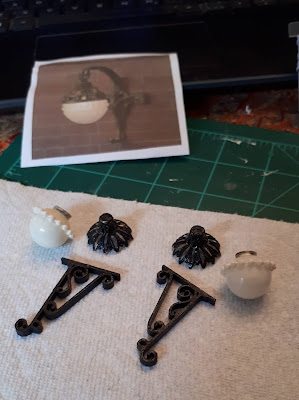 To get the aged, bronzed look of the metal in the inspiration photo, I used metallic gold paint, wiping some off the brush onto paper towel so the paint would go on with a very light hand.  I think they turned out quite well. 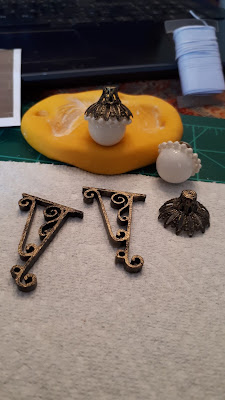 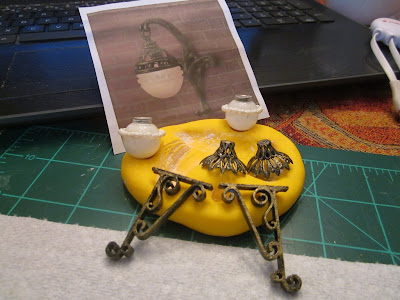 I actually could have finished these lights except....I couldn't find the little LED bulbs I planned on putting inside.  I think they are on my craft table downstairs which currently is hidden under about a foot of "stuff" that is set on top of them.  *sigh*  That may be my next project - cleaning up my craft room again!

So, with the brackets, I think they will probably have the art deco look we are going for.  Perhaps I will have finished pictures to show next week if I can find the darn lights. 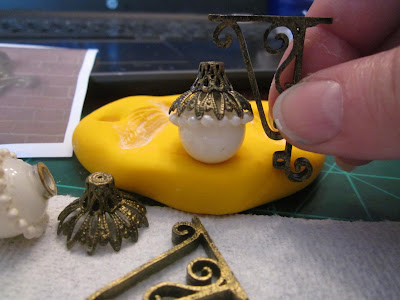 I hope you all have a wonderful week and are able to fit some time in on your minis as well.  Big hugs to all!!  TTFN!!!! - Marilyn

Marilyn D.
I have been a long-time crafter interested in many different media - but have had a yearning to work in miniatures for many decades. As a result, I have collected various items over time without having any use for them but I have decided that now is the time. I will chronicle my experiences here and hope that others can learn along the way with me. I am a retired civil servant. My DH and I will celebrate our 50th wedding anniversary in August 2021. We have two grown children - one in NB, the other in NL, and two grandchildren. We travel often to Ireland and have cultivated many friends and loved ones there as well. I hope to share some of those stories from time to time also.